Motivated by the potential similarities between the underlying mechanisms of the enhanced memory storage capacity in black holes and in brain networks, we construct an artificial quantum neural network based on gravity-like synaptic connections and a symmetry structure that allows to describe the network in terms of geometry of a d-dimensional space. We show that the network possesses a critical state in which the gapless neurons emerge that appear to inhabit a (d-1)-dimensional surface, with their number given by the surface area. In the excitations of these neurons, the network can store and retrieve an exponentially large number of patterns within an arbitrarily narrow energy gap. The corresponding micro-state entropy of the brain network exhibits an area law. The neural network can be described in terms of a quantum field, via identifying the different neurons with the different momentum modes of the field, while identifying the synaptic connections among the neurons with the interactions among the corresponding momentum modes. Such a mapping allows to attribute a well-defined sense of geometry to an intrinsically non-local system, such as the neural network, and vice versa, it allows to represent the quantum field model as a neural network.

Collapse models postulate that space is filled with a collapse noise field, inducing quantum Brownian motions which are dominant during the measurement, thus causing collapse of the wave function. An important manifestation of collapse noise field, if any, is thermal energy generation, thus disturbing the temperature profile of the system. The experimental investigation of this effect provides the most promising test of collapse models against standard quantum theory. In this paper, we calculate the collapse-driven heat generation by solving stochastic Heisenberg equations. We perform our calculation for the mass-proportional CSL collapse model with non-white noise for a three-dimensional multi-atomic Bravais lattice.

Non-perturbative quantum gravity effects might allow a black-to-white hole transition. We revisit this increasingly popular hypothesis by taking into account the fundamentally random nature of the bouncing time. We show that if the primordial mass spectrum of black holes is highly peaked, the expected signal can in fact match the wavelength of the observed fast radio bursts. On the other hand, if the primordial mass spectrum is wide and smooth, clear predictions are suggested and the sensitivity to the shape of the spectrum is studied.

Quantum mechanics in noncommutative space modifies the standard result of the Aharonov-Bohm effect for electrons and other recent quantum effects. Here we obtain the phase in noncommutative space for the Spavieri effect, a generalization of Aharonov-Bohm effect which involves a coherent superpositio…
[Phys. Rev. A 97, 012109] Published Fri Jan 12, 2018

We model spherically symmetric black holes within the group field theory formalism for quantum gravity via generalised condensate states, involving sums over arbitrarily refined graphs (dual to 3d triangulations). The construction relies heavily on both the combinatorial tools of random tensor models and the quantum geometric data of loop quantum gravity, both part of the group field theory formalism. Armed with the detailed microscopic structure, we compute the entropy associated with the black hole horizon, which turns out to be equivalently the Boltzmann entropy of its microscopic degrees of freedom and the entanglement entropy between the inside and outside regions. We recover the area law under very general conditions, as well as the Bekenstein-Hawking formula. The result is also shown to be generically independent of any specific value of the Immirzi parameter.

The role attributed to the observer in various interpretations of quantum mechanics as well as in classical statistical mechanics is discussed, with particular attention being paid to the Everett interpretation. In this context, the important difference between “quasi-classical” (robust against decoherence) and “macroscopically given” (rather than being part of a thermodynamic ensemble) is pointed out.

Quantum gravity aims to describe gravity in quantum mechanical terms. How exactly this needs to be done remains an open question. Various proposals have been put on the table, such as canonical quantum gravity, loop quantum gravity, string theory, etc. These proposals often encounter technical and conceptual problems. In this chapter, we focus on canonical quantum gravity and discuss how many conceptual problems, such as the measurement problem and the problem of time, can be overcome by adopting a Bohmian point of view. In a Bohmian theory (also called pilot-wave theory or de Broglie-Bohm theory, after its originators de Broglie and Bohm), a system is described by certain variables in space-time such as particles or fields or something else, whose dynamics depends on the wave function. In the context of quantum gravity, these variables are a space-time metric and suitable variable for the matter fields (e.g., particles or fields). In addition to solving the conceptual problems, the Bohmian approach yields new applications and predictions in quantum cosmology. These include space-time singularity resolution, new types of semi-classical approximations to quantum gravity, and approximations for quantum perturbations moving in a quantum background. 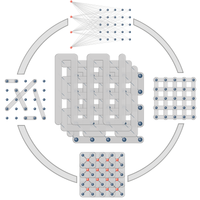 Romero, Gustavo E. (2013) From change to spacetime: an Eleatic journey. Fundations of Science.

Thermodynamics and information theory have been intimately related since the times of Maxwell and Boltzmann. Recently it was shown that the dissipated work in an arbitrary nonequilibrium process is related to the Rényi divergences between two states along the forward and reversed dynamics. Here we s…
[Phys. Rev. A 97, 012105] Published Tue Jan 09, 2018

Quantum bit commitment is insecure in the standard non-relativistic quantum cryptographic framework, essentially because Alice can exploit quantum steering to defer making her commitment. Two assumptions in this framework are that: (a) Alice knows the ensembles of evidence E corresponding to either commitment; and (b) system E is quantum rather than classical. Here, we show how relaxing assumption (a) or (b) can render her malicious steering operation indeterminable or inexistent, respectively. Finally, we present a secure protocol that relaxes both assumptions in a quantum teleportation setting. Without appeal to an ontological framework, we argue that the protocol’s security entails the reality of the quantum state, provided retrocausality is excluded.

General relativity cannot be formulated as a perturbatively renormalizable quantum field theory. An argument relying on the validity of the Bekenstein–Hawking entropy formula aims at dismissing gravity as non-renormalizable per se, against hopes (underlying programs such as Asymptotic Safety) that d-dimensional GR could turn out to have a non-perturbatively renormalizable d–dimensional quantum field theoretic formulation. In this note we discuss various forms of highly problematic semi-classical extrapolations assumed by both sides of the debate concerning what we call The Entropy Argument, and show that a large class of dimensional reduction scenarios leads to the blow-up of Bekenstein–Hawking entropy.

Initially motivated by their relevance in foundations of quantum mechanics and more recently by their applications in different contexts of quantum information science, violations of Bell inequalities have been extensively studied during the last years. In particular, an important effort has been made in order to quantify such Bell violations. Probabilistic techniques have been heavily used in this context with two different purposes. First, to quantify how common the phenomenon of Bell violations is; and second, to find large Bell violations in order to better understand the possibilities and limitations of this phenomenon. However, the strong mathematical content of these results has discouraged some of the potentially interested readers. The aim of the present work is to review some of the recent results in this direction by focusing on the main ideas and removing most of the technical details, to make the previous study more accessible to a wide audience.

It was at the dawn of the historical developments of quantum mechanics when Schr\”odinger, Kennard and Darwin proposed an interesting type of Gaussian wave packets, which do not spread out while evolving in time. Originally, these wave packets are the prototypes of the renowned discovery, which are familiar as coherent states today. Coherent states are inevitable in the study of almost all areas of modern science, and the rate of progress of the subject is astonishing nowadays. Nonclassical states constitute one of the distinguished branches of coherent states having applications in various subjects including quantum information processing, quantum optics, quantum superselection principles and mathematical physics. On the other hand, the compelling advancements of non-Hermitian systems and related areas have been appealing, which became popular with the seminal paper by Bender and Boettcher in 1998. The subject of non-Hermitian Hamiltonian systems possessing real eigenvalues are exploding day by day and combining with almost all other subjects rapidly, in particular, in the areas of quantum optics, lasers and condensed matter systems, where one finds ample successful experiments for the proposed theory. For this reason, the study of coherent states for non-Hermitian systems have been very important. In this article, we review the recent developments of coherent and nonclassical states for such systems and discuss their applications and usefulness in different contexts of physics. In addition, since the systems considered here originate from the broader context of the study of minimal uncertainty relations, our review is also of interest to the mathematical physics community.

We develop the point of view where Quantum Mechanics results from the interplay between the quantized number of “modalities” accessible to a quantum system, and the continuum of “contexts” that are required to define these modalities. We point out the specific roles of “extracontextuality” and “extravalence” of modalities, and relate them to the Kochen-Specker and Gleason theorems.

To help resolve stubborn aporias in quantum mechanics, Kastner, Kauffman and Epperson have recently proposed a new interpretation of Heisenbergs ontological duality of res extensa and res potentia. In related work, Khrennikov and Aerts and their respective associates have explored the intermediate domain of mesoscopic phenomena in which quantum-like behavior can be observed and formalized. We generalize this work to define a third domain, one of macroscopic, interactive processes to which quantum concepts, but not quantum formalism apply. We show that they follow the non-standard logic proposed in the last century by the FrancoRomanian thinker Stephane Lupasco. This logical system, grounded in the ontological dualities in nature, describes the evolution of complex processes and emergence at macroscopic levels of reality as chains of interacting actualities and potentialities. Without going outside the laws of physics, some new approaches to the problems of life, cognition and information can be made. The most appropriate formalism for describing this logic is under current scrutiny.