Lounesto’s classification of spinors is a comprehensive and exhaustive algorithm that, based on the bilinears covariants, discloses the possibility of a large variety of spinors, comprising regular and singular spinors and their unexpected applications in physics and including the cases of Dirac, Weyl, and Majorana as very particular spinor fields. In this paper we pose the problem of an analogous classification in the framework of second quantization. We first discuss in general the nature of the problem. Then we start the analysis of two basic bilinear covariants, the scalar and pseudoscalar, in the second quantized setup, with expressions applicable to the quantum field theory extended to all types of spinors. One can see that an ampler set of possibilities opens up with respect to the classical case. A quantum reconstruction algorithm is also proposed. The Feynman propagator is extended for spinors in all classes.

The entropy of a quantum system is a measure of its randomness, and has applications in measuring quantum entanglement. We study the problem of measuring the von Neumann entropy, $S(\rho)$, and R\’enyi entropy, $S_\alpha(\rho)$ of an unknown mixed quantum state $\rho$ in $d$ dimensions, given access to independent copies of $\rho$.

For non-integral $\alpha$, and the von Neumann entropy, we consider the well known Empirical Young Diagram (EYD) algorithm, which is the analogue of empirical plug-in estimator in classical distribution estimation. As a corollary, we strengthen a lower bound on the copy complexity of the EYD algorithm for learning the maximally mixed state by showing that the lower bound holds with exponential probability (which was previously known to hold with a constant probability). For integral $\alpha>1$, we provide new concentration results of certain polynomials that arise in Kerov algebras of Young diagrams.

We consider a feedback control loop rectifying particle transport through a single quantum dot that is coupled to two electronic leads. While monitoring the occupation of the dot, we apply conditional control operations by changing the tunneling rates between the dots and its reservoirs, which can be interpreted as the action of a Maxwell demon opening or closing a shutter. This can generate a current at equilibrium or even against a potential bias, producing electric power from information. While this interpretation is well-explored in the weak-coupling limit, we can address the strong-coupling regime with a fermionic reaction-coordinate mapping, which maps the system into a serial triple quantum dot coupled to two leads. There, we find that a continuous projective measurement of the central dot would lead to a complete suppression of electronic transport due to the quantum Zeno effect. In contrast, a microscopic model for the quantum point contact detector implements a weak measurement, which allows for closure of the control loop without inducing transport blockade. In the weak-coupling regime between the central dot and its leads, the energy flows associated with the feedback loop are negligible, and the information gained in the measurement induces a bound for the generated electric power. In contrast, in the strong coupling limit, the protocol may require more energy for opening and closing the shutter than electric power produced, such that the device is no longer information-dominated and can thus not be interpreted as a Maxwell demon.

This is a comment on “Strong Measurements Give a Better Direct Measurement of the Quantum Wave Function” which was published as PRL 116, 040502 (2016). We show that there is crucial normalization error in this Letter which invalidates the proposal.

We solve the relativistic Klein–Gordon equation for a light particle gravitationally bound to a heavy central mass, with the gravitational interaction prescribed by the metric of a spherically symmetric space-time. Metrics are considered for an impenetrable sphere, a soft sphere of uniform density, and a soft sphere with a linear transition from constant to zero density; in each case the radius of the central mass is chosen to be sufficient to avoid any event horizon. The solutions are obtained numerically and compared with nonrelativistic Coulomb-type solutions, both directly and in perturbation theory, to study the general-relativistic corrections to the quantum solutions for a $1/r$ potential. The density profile with a linear transition is chosen to avoid singularities in the wave equation that can be caused by a discontinuous derivative of the density.

We consider Hilbert’s problem of the axioms of Physics at a qualitative or conceptual level. This issue is more pressing than ever as we seek to understand how both GR and quantum theory could emerge from some deeper theory of quantum gravity, and in this regard I have previously proposed a `principle of self-duality’ or `quantum Born reciprocity’ as a key structure. Here I outline recent work around the idea of quantum spacetime as motivated by this non-standard philosophy, including a new toy model of gravity on a spacetime consisting of four points forming a square.

After decades of hype, quantum computers are poised to prove their superiority over classical machines. Now the race is on to figure out what to do with them

Grover’s algorithm, which finds an element in an unsorted list, has been implemented using a nuclear spin in a single-molecule magnet. 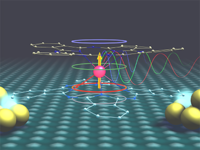 We present unambiguous experimental evidence for (quantum-like) probabilistic contextuality in psychology. All previous attempts to find contextuality in a psychological experiment were unsuccessful because of the violations of marginal selectivity in behavioral data (corresponding to no-signaling or no-disturbance in quantum physics). In our crowdsourcing experiment respondents were making two simple choices: of one of two characters in a story (The Snow Queen by Hans Christian Andersen), and of one of two characteristics, such as Kind or Evil, so that the character and the characteristic chosen matched the story line. The formal structure of the experiment imitated that of the Einstein-Podolsky-Rosen paradigm in the Bohm-Bell version. Marginal selectivity was violated, indicating that the two choices were directly influencing each other, but the application of a mathematical test developed in the Contextuality-by-Default theory indicated a strong presence of contextuality proper, not reducible to direct influences.

The notion of ontological states is introduced here with reference to the Cellular Automaton Interpretation of Quantum Mechanics proposed by G.’t Hooft. A class of discrete deterministic “Hamiltonian” Cellular Automata is defined that has been shown to bear many features in common with continuum quantum mechanical models, however, deformed by the presence of a finite discreteness scale $l$, such that for $l\rightarrow 0$ the usual properties result — e.g., concerning linearity, dispersion relations, multipartite systems, and Superposition Principle. We argue that within this class of models only very primitive realizations of ontological states and their dynamics can exist, since the equations of motion tend to produce superposition states that are not ontological. The most interesting, if not only way out seems to involve interacting multipartite systems composed of two-state “Ising spins”, which evolve by a unitary transfer matrix. Thus, quantum like and ontological models appear side by side here, but distinguished by second-order and first-order dynamics, respectively.

The new thermodynamics: how quantum physics is bending the rules

Experiments are starting to probe the limits of the classical laws of thermodynamics.

We review recent theoretical results, demonstrating breakdown of the equivalence between active and passive gravitational masses and energy due to quantum effects in General Relativity. In particular, we discuss the simplest composite quantum body – a hydrogen atom – and define its gravitational masses operators. Using Gedanken experiment, we show that the famous Einstein’s equation, $E =mc^2$, is broken with small probability for passive gravitational mass of the atom. It is important that the expectation values of both active and passive gravitational masses satisfy the above mentioned equation for stationary quantum states. Nevertheless, we stress that, for quantum superpositions of stationary states in a hydrogen atom, where the expectation values of energy are constant, the expectation values of the masses oscillate in time and, thus, break the Einstein’s equation. We briefly discuss experimental possibility to observe the above-mentioned time-dependent oscillations. In this review, we also improve several drawbacks of the original pioneering works.

A central question for causal inference is to decide whether a set of correlations fits a given causal structure. In general, this decision problem is computationally infeasible and hence several approaches have emerged that look for certificates of compatibility. Here, we review several such approaches based on entropy. We bring together the key aspects of these entropic techniques with unified terminology, filling several gaps and establishing new connections, all illustrated with examples. We consider cases where unobserved causes are classical, quantum and post-quantum, and discuss what entropic analyses tell us about the difference. This difference has applications to quantum cryptography, where it can be crucial to eliminate the possibility of classical causes. We discuss the achievements and limitations of the entropic approach in comparison to other techniques and point out the main open problems.

This paper examines two cosmological models of quantum gravity (from string theory and loop quantum gravity) to investigate the foundational and conceptual issues arising from quantum treatments of the big bang. While the classical singularity is erased, the quantum evolution that replaces it may not correspond to classical spacetime: it may instead be a non-spatiotemporal region, which somehow transitions to a spatiotemporal state. The different kinds of transition involved are partially characterized, the concept of a physical transition without time is investigated, and the problem of empirical incoherence for regions without spacetime is discussed.

Publication date: 20 December 2017
Source:Physics Letters A, Volume 381, Issue 47
Author(s): Marko Toroš, Giulio Gasbarri, Angelo Bassi
Matter-wave interferometry is a direct test of the quantum superposition principle for massive systems, and of collapse models. Here we show that the bounds placed by matter-wave interferometry depend weakly on the details of the collapse mechanism. Specifically, we compute the bounds on the CSL model and its variants, provided by the KDTL interferometry experiment of Arndt’s group (Eibenberger et al. (2013) [3]), which currently holds the record of largest mass in interferometry. We also show that the CSL family of models emerges naturally by considering a minimal set of assumptions. In particular, we construct the dynamical map for the colored and dissipative Continuous Spontaneous Localization (cdCSL) model, which reduces to the CSL model and variants in the appropriate limits. In addition, we discuss the measure of macroscopicity based on the cdCSL model.
Flash Physics: need-to-know updates from the world of physics

We discuss information-theoretic properties of low-energy photons and gravitons in the S matrix. Given an incoming n-particle momentum eigenstate, we demonstrate that unobserved soft photons decohere nearly all outgoing momentum superpositions of charged particles, while the universality of gravity …
[Phys. Rev. Lett. 119, 180502] Published Mon Oct 30, 2017

Science is a constructed narrative of the natural world based on information gathering and its subsequent analysis. In this essay, we develop a novel approach to the epistemic foundations of the scientific narrative, as based on our experiential interactions with the natural world. We first review some of the basic aspects of both Bayesian statistics and Shannon’s information theory as applied to the construction of meaningful conceptualization of the natural world. This conceptualization is rendered through the maps we construct of the world based on our limited knowledge of reality. We propose a path from experience to information and physics based on the notion that information is experience that induces change in an Epistemic Agent (EA): the change may be local and focused to a minor aspect of reality or it may be broad and worldview-changing. We illustrate our approach through an analysis of a measure of spatial complexity proposed by one of us called Configuration Entropy (CE), and establish a link between experience at the cognitive level and information content, showing that the CE is a quantitative measure of how much information in spatial-complexity the external world hides from an EA.