Relations among the concepts of measurement, information, and physical reality are established with the quantification of the degree of reality of an observable for a given preparation. It is found that for pure states the entanglement with the apparatus precisely determines the amount by which the reality of the monitored observable increases. 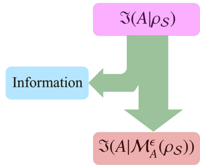 We show that the state of the Hawking radiation emitted from a large Schwarzschild black hole (BH) deviates significantly from a classical state, in spite of its apparent thermal nature. For this state, the occupation numbers of single modes of massless asymptotic fields, such as photons, gravitons and possibly neutrinos, are small and, as a result, their relative fluctuations are large. The occupation numbers of massive fields are much smaller and suppressed beyond even the expected Boltzmann suppression. It follows that this type of thermal state cannot be viewed as classical or even semiclassical. We substantiate this claim by showing that, in a state with low occupation numbers, physical observables have large quantum fluctuations and, as such, cannot be faithfully described by a mean-field or by a WKB-like semiclassical state. Since the evolution of the BH is unitary, our results imply that the state of the BH interior must also be non-classical when described in terms of the asymptotic fields. We show that such a non-classical interior cannot be described in terms of a semiclassical geometry, even though the average curvature is sub-Planckian.

In this paper, we will show that gravity can emerge from an effective field theory, obtained by tracing out the fermionic system from an interacting quantum field theory, when we impose the condition that the field equations must be Cauchy predictable. The source of the gravitational field can be identified with the quantum interactions that existed in the interacting QFT. This relation is very similar to the ER= EPR conjecture and strongly relies on the fact that emergence of a classical theory will be dependent on the underlying quantum processes and interactions. We consider two concrete example for reaching the result – one where initially there was no gravity and other where gravity was present. The latter case will result in first order corrections to Einstein’s equations and immediately reproduces well-known results like effective event horizons and gravitational birefringence.

This paper presents a minimal formulation of nonrelativistic quantum mechanics, by which is meant a formulation which describes the theory in a succinct, self-contained, clear, unambiguous and of course correct manner. The bulk of the presentation is the so-called \lq microscopic theory’ (MIQM), applicable to any closed system $S$ of arbitrary size $N$, using concepts referring to $S$ alone, without resort to external apparatus or external agents. An example of a similar minimal microscopic theory is the standard formulation of classical mechanics, which serves as the template for a minimal quantum theory. The only substantive assumption required is the replacement of the classical Euclidean phase space by Hilbert space in the quantum case, with the attendant all-important phenomenon of quantum incompatibility. Two fundamental theorems of Hilbert space, the Kochen-Specker-Bell theorem and Gleason’s theorem, then lead inevitably to the well-known Born probability rule. For both classical and quantum mechanics, questions of physical implementation and experimental verification of the predictions of the theories are the domain of the macroscopic theory, which is argued to be a special case or application of the more general microscopic theory.

Quantum tunneling of a black hole into a white hole provides a model for the full life cycle of a black hole. The white hole acts as a long-lived remnant, solving the black-hole information paradox. The remnant solution of the paradox has long been viewed with suspicion, mostly because remnants seemed to be such exotic objects. We point out that (i) established physics includes objects with precisely the required properties for remnants: white holes with small masses but large finite interiors; (ii) non-perturbative quantum-gravity indicates that a black hole tunnels precisely into such a white hole, at the end of its evaporation. We address the objections to the existence of white-hole remnants, discuss their stability, and show how the notions of entropy relevant in this context allow them to evade several no-go arguments. A black hole’s formation, evaporation, tunneling to a white hole, and final slow decay, form a unitary process that does not violate any known physics.

Commonly accepted views on foundations of science, either based on bottom-up construction or top-down reduction of fundamental entities are here rejected. We show how the current scientific methodology entails a certain kind of research for foundations of science, which are here regarded as insurmountable limitations. At the same time, this methodology allows to surpass the bounds classically accepted as fundamental, yet often based on mere “philosophical prejudices”. Practical examples are provided from quantum mechanics and biophysics.

The idea that the future can influence the past may finally explain the inherent randomness of quantum theory and bring it in line with Einstein’s space-time
Dewar, Neil and Weatherall, James Owen (2017) On Gravitational Energy in Newtonian Theories. [Preprint]

It is generally argued that if the wave-function in the de Broglie–Bohm theory is a physical field, it must be a field in configuration space. Nevertheless, it is possible to interpret the wave-function as a multi-field in three-dimensional space. This approach hasn’t received the attention yet it really deserves. The aim of this paper is threefold: first, we show that the wave-function is naturally and straightforwardly construed as a multi-field; second, we show why this interpretation is superior to other interpretations discussed in the literature; third, we clarify common misconceptions.