Symmetry-Protected Topological (SPT) phases are short-range entangled (SRE) gapped phases of quantum matter protected by global symmetries, that cannot be unitarily and adiabatically deformed to a trivial phase without closing the gap or breaking symmetry. In this work, we show that, for several SPT phases, enlarging symmetries may effectively achieve the consequences of explicitly breaking symmetries. In other words, we demonstrate that non-trivial SPT phases can be unwound to trivial ones by symmetry extension– through a path where the Hilbert space is enlarged and the Hamiltonian is invariant under a larger symmetry group applying the idea of Wang-Wen-Witten [arXiv:1705.06728]. We show examples of both bosonic and fermionic SPT phases in 1+1 dimensions, including a Haldane spin chain and layers of Kitaev’s Majorana fermionic chains. By adding degrees of freedom into the boundary/bulk, we can lift the zero mode degeneracy, or unwind the whole system. Furthermore, based on properties of Schur cover, we sketch a general picture of unwinding applicable to any 1+1D bosonic SPT phase protected by onsite finite symmetry. Altogether we show that SRE states can be unwound by symmetry breaking, inversion and symmetry extension.

Given a physical device as a black box, one can in principle fully reconstruct its input-output transfer function by repeatedly feeding different input probes through the device and performing different measurements on the corresponding outputs. However, for such a complete tomographic reconstruction to work, full knowledge of both input probes and output measurements is required. Such an assumption is not only experimentally demanding, but also logically questionable, as it produces a circular argument in which the characterization of unknown devices appears to require other devices to have been already characterized beforehand. Here, we introduce a method to overcome such limitations present in usual tomographic techniques. We show that, even without any knowledge about the tomographic apparatus, it is still possible to infer the unknown device to a high degree of precision, solely relying on the observed data. This is achieved by employing a criterion that singles out the minimal explanation compatible with the observed data. Our method, that can be seen as a device-independent analogue of tomography, is solved analytically and experimentally tested in an actual implementation with superconducting qubits for a broad class of quantum channels.

We present a novel fundamental effect that for the matter waves the space-averaging free-fall point of quantum particles undergoes a spin-dependent transverse shift in the gravitational field of Earth. This effect is similar to the geometric spin Hall effect (GSHE) [Aiello et al., Phys. Rev. Lett. 103, 100401 (2009)] and can be called gravity-induced GSHE. This effect suggests that there might be violations of the universality of free fall (UFF) or weak equivalence principle (WEP) in the quantum domain.

Publication date: Available online 1 May 2018
Source:Physics Reports
Author(s): Wojciech H. Zurek
A system in equilibrium does not evolve – time independence is its telltale characteristic. However, in Newtonian physics the microstate of an individual system (a point in its phase space) evolves incessantly in accord with its equations of motion. Ensembles were introduced in XIX century to bridge that chasm between continuous motion of phase space points in Newtonian dynamics and stasis of thermodynamics: While states of individual classical systems inevitably evolve, a phase space distribution of such states – an ensemble – can be time-independent. I show that entanglement (e.g., with the environment) can yield a time-independent equilibrium in an individual quantum system. This allows one to eliminate ensembles – an awkward stratagem introduced to reconcile thermodynamics with Newtonian mechanics – and use an individual system interacting and therefore entangled with its heat bath to represent equilibrium and to elucidate the role of information and measurements in physics. Thus, in our quantum Universe one can practice statistical physics without ensembles – hence, in a sense, without statistics. The elimination of ensembles uses ideas that led to the recent derivation of Born’s rule from the symmetries of entanglement, and I start with a review of that derivation. I then review and discuss difficulties related to the reliance on ensembles and illustrate the need for ensembles with the classical Szilard’s engine. A similar quantum engine – a single system interacting with the thermal heat bath environment – is enough to establish thermodynamics. The role of Maxwell’s demon (which in this quantum context resembles Wigner’s friend) is also discussed.
Lam, Vincent and Wuthrich, Christian (2018) Spacetime is as spacetime does. [Preprint]
Encrypted quantum messages are limited by how far photons can stably pass through optical fibres, but they can now travel the distance between London and Paris

Given a quantum (or statistical) system with a very large number of degrees of freedom and a preferred tensor product factorization of the Hilbert space (or of a space of distributions) we describe how it can be approximated with a very low-dimensional field theory with geometric degrees of freedom. The geometric approximation procedure consists of three steps. The first step is to construct weighted graphs (we call information graphs) with vertices representing subsystems (e.g., qubits or random variables) and edges representing mutual information (or the flow of information) between subsystems. The second step is to deform the adjacency matrices of the information graphs to that of a (locally) low-dimensional lattice using the graph flow equations introduced in the paper. (Note that the graph flow produces very sparse adjacency matrices and thus might also be used, for example, in machine learning or network science where the task of graph sparsification is of a central importance.) The third step is to define an emergent metric and to derive an effective description of the metric and possibly other degrees of freedom. To illustrate the procedure we analyze (numerically and analytically) two information graph flows with geometric attractors (towards locally one- and two-dimensional lattices) and metric perturbations obeying a geometric flow equation. Our analysis also suggests a possible approach to (a non-perturbative) quantum gravity in which the geometry (a secondary object) emerges directly from a quantum state (a primary object) due to the flow of the information graphs.

The objectivity is a basic requirement for the measurements in the classical world, namely, different observers must reach a consensus on their measurement results, so that they believe that the object exists “objectively” since whoever measures it obtains the same result. We find that this simple requirement of objectivity indeed imposes an important constraint upon quantum measurements, i.e., if two or more observers could reach a consensus on their quantum measurement results, their measurement basis must be orthogonal vector sets. This naturally explains why quantum measurements are based on orthogonal vector basis, which is proposed as one of the axioms in textbooks of quantum mechanics. The role of the macroscopicality of the observers in an objective measurement is discussed, which supports the belief that macroscopicality is a characteristic of classicality.

Field theories that are generally covariant but nongravitational at tree level typically give rise to an emergent gravitational interaction whose strength depends on a physical regulator. We consider emergent gravity models in which scalar fields assume the role of clock and rulers, addressing the problem of time in quantum gravity. We discuss the possibility of nontrivial dynamics for clock and ruler fields, and describe some of the consequences of those dynamics for the emergent gravitational theory.
Dawid, Richard (2018) The Significance of Non-Empirical Confirmation in Fundamental Physics. [Preprint]

New calculations show that a single stationary state of an isolated quantum system encodes physical properties of the entire system at all temperatures, which provides new, fundamental insight into the quantum nature of thermalization. 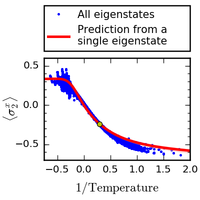 It has been observed that quantum walks on regular lattices can give rise to wave equations for relativistic particles in the continuum limit. In this paper, we define the three-dimensional discrete-time walk as a product of three coined one-dimensional walks. The factor corresponding to each one-di…
[Phys. Rev. A 97, 042131] Published Mon Apr 30, 2018