It is argued that quantum theory is best understood as requiring an ontological duality of res extensa and res potentia, where the latter is understood per Heisenberg’s original proposal, and the former is roughly equivalent to Descartes’ ‘extended substance.’ However, this is not a dualism of mutually exclusive substances in the classical Cartesian sense, and therefore does not inherit the infamous ‘mind-body’ problem. Rather, res potentia and res extensa are proposed as mutually implicative ontological extants that serve to explain the key conceptual challenges of quantum theory; in particular, nonlocality, entanglement, null measurements, and wave function collapse. It is shown that a natural account of these quantum perplexities emerges, along with a need to reassess our usual ontological commitments involving the nature of space and time.

We use the path integral form of quantum electrodynamics (QED) to show that a causal classical limit to QED can be derived by functionally integrating over the photon coordinates, starting from an initial photon vacuum and ending in a final coherent radiation state driven by the anticipated classical charged particle trajectories. The resulting charged particle transition amplitude depends only on particle coordinates. When the \( {\hbar} \, \to \,0 \) limit is taken, only those particle paths that are not constrained by the final radiation state are varied. These results demonstrate that the collapse from an infinity of charged particle paths, a path integral description, to causally interacting classical trajectories, a stationary-action description, is critically dependent on including final coherent state radiation and maintaining the distinction between particle paths that are free to vary and those trajectories that can be monitored by the final state radiation.

Hugh Everett, creator of this radical idea during a drunken debate more than 60 years ago, died before he could see his theory gain widespread popularity 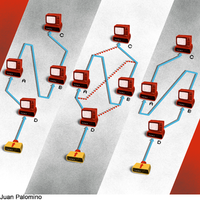 The Unruh effect is essential to keep the consistency of quantum field theory in inertial and uniformly accelerated frames. Thus, the Unruh effect must be considered as well tested as quantum field theory itself. In spite of it, it would be nice to realize an experiment whose output could be directly interpreted in terms of the Unruh effect. This is not easy because the linear acceleration needed to reach a temperature 1 K is of order $10^{20} {\rm m/s}^2$. We discuss here a conceptually simple experiment reachable under present technology which may accomplish this goal. The inspiration for this proposal can be traced back to Atsushi Higuchi’s Ph.D. thesis, which makes it particularly suitable to pay tribute to him on occasion of his $60^{\rm th}$ anniversary.

One attractive interpretation of quantum mechanics is the ensemble interpretation, where Quantum Mechanics merely describes a statistical ensemble of objects and not individual objects.

But this interpretation does not address why the wave-function plays a central role in the calculations of probabilities, unlike most other interpretations of quantum mechanics.

It is thus a good parametrization which allows us to represent a group of transformations using linear transformations of the hypersphere, despite the fact that a stochastic process is not always a Markov process. The collapse of the wave-function is required to compensate the fact that the action of the group on the probability distribution is not linear.

We present a conceptually clear introduction to quantum theory at a level suitable for high-school students attending the International Summer School for Young Physicists (ISSYP) at Perimeter Institute. It is entirely self-contained and no university-level background knowledge is required. The lectures we given over four days, four hours each day. On the first day the students were given all the relevant mathematical background from linear algebra and probability theory. On the second day, we used the acquired mathematical tools to define the full quantum theory in the case of a finite Hilbert space and discuss some consequences such as entanglement, Bell’s theorem and the uncertainty principle. Finally, in days three and four we presented an overview of advanced topics related to infinite-dimensional Hilbert spaces, including canonical and path integral quantization, the quantum harmonic oscillator, quantum field theory, the Standard Model, and quantum gravity.

Causal sets (or causets) are a particular class of partially ordered sets, which are proposed as basic models of discrete space-time, specially in the field of quantum gravity. In this context, we show the existence of temporal foliations for any causal set, or more generally, for a causal space. Moreover, we show that (order-preserving) automorphisms of a large class of infinite causal sets fall into two classes 1) Automorphisms of spacelike hypersurfaces in some given foliation (i.e. spacelike automorphisms), or 2) Translations in time. More generally, we show that for any automorphism \(\Phi \) of a generic causal set \({\mathcal {C}}\) , there exists a partition of \({\mathcal {C}}\) into finitely many subcausets, on each of which (1) or (2) above hold. These subcausets can be assumed connected if, in addition, there are enough distinct orbits under \(\Phi \) .

The relational interpretation of quantum mechanics proposes to solve the measurement problem and reconcile completeness and locality of quantum mechanics by postulating relativity to the observer for events and facts, instead of an absolute “view from nowhere”. The aim of this paper is to clarify this interpretation, and in particular, one of its central claims concerning the possibility for an observer to have knowledge about other observer’s events. I consider three possible readings of this claim (deflationist, relationist and relativist), and develop the most promising one, relativism, to show how it fares when confronted with the traditional interpretative problems of quantum mechanics. Although it provides answers to some problems, I claim that there is currently no adapted locality criterion to evaluate whether the resulting interpretation is local or not.