We suggest that dark energy and dark matter may be a cosmic ouroboros of quantum gravity due to the coherent vacuum structure of spacetime. We apply the emergent gravity to a large $N$ matrix model by considering the vacuum in the noncommutative (NC) Coulomb branch satisfying the Heisenberg algebra. We observe that UV fluctuations in the NC Coulomb branch are always paired with IR fluctuations and these UV/IR fluctuations can be extended to macroscopic scales. We show that space-like fluctuations give rise to the repulsive gravitational force while time-like fluctuations generate the attractive gravitational force. When considering the fact that the fluctuations are random in nature and we are living in the (3+1)-dimensional spacetime, the ratio of the repulsive and attractive components will end in $\frac{3}{4}: \frac{1}{4}=75:25$ and this ratio curiously coincides with the dark composition of our current Universe. If one includes ordinary matters which act as the attractive force, the emergent gravity may explain the dark sector of our Universe more precisely.

We present a generally covariant approach to quantum mechanics. Generalized positions, momenta and time variables are treated as coordinates on a fundamental “phase-spacetime” manifold. Dynamics are encoded by giving phase-spacetime a contact structure. BRST quantization then yields a physical Hilbert space whose elements satisfy a parallel transport equation on a certain vector bundle over phase-spacetime. The inner product of solutions both reproduces and generalizes the Wigner functions of standard quantum mechanics.

It is argued that quantum theory is best understood as requiring an ontological dualism of res extensa and res potentia, where the latter is understood per Heisenberg’s original proposal, and the former is roughly equivalent to Descartes’ ‘extended substance.’ However, this is not a dualism of mutually exclusive substances in the classical Cartesian sense, and therefore does not inherit the infamous ‘mind-body’ problem. Rather, res potentia and res extensa are defined as mutually implicative ontological extants that serve to explain the key conceptual challenges of quantum theory; in particular, nonlocality, entanglement, null measurements, and wave function collapse. It is shown that a natural account of these quantum perplexities emerges, along with a need to reassess our usual ontological commitments involving the nature of space and time.

Measurements are crucial in quantum mechanics, in fundamental research as well as in applicative fields like quantum metrology, quantum-enhanced measurements and other quantum technologies. In the recent years, weak-interaction-based protocols like Weak Measurements and Protective Measurements have been experimentally realized, showing peculiar features leading to surprising advantages in several different applications. In this work we analyze the validity range for such measurement protocols, that is, how the interaction strength affects the weak value extraction, by measuring different polarization weak values measured on heralded single photons. We show that, even in the weak interaction regime, the coupling intensity limits the range of weak values achievable, putting a threshold on the signal amplification effect exploited in many weak measurement based experiments.

Based on a recently proposed model of physical reality and an underlying criterion of nonlocality for contexts [A. L. O. Bilobran and R. M. Angelo, Europhys. Lett. 112, 40005 (2015)] we introduce a realism-based quantifier of nonlocality for bipartite quantum states. We prove that this measure reduces to entanglement for pure states, thus being free of anomalies in arbitrary dimensions, and identify the class of states with null realism-based nonlocality. Then, we show that such a notion of nonlocality can be positioned at the lowest level in the hierarchy of quantumness quantifiers, meaning that it can occur even for Bell-local states. These results open a new perspective for nonlocality studies.

Angeloni, Roberto (2017) History of Science as a Facilitator for the Study of Physics: A Repertoire from the History of Contemporary Physics. [Preprint]
Earman, John (2017) Credence and Chance in Quantum Theory. [Preprint]
Webermann, Michael (2017) Does Physics Provide Us With Knowledge About the Things in Themselves ? [Preprint]
Publication date: Available online 13 September 2017
Source:Studies in History and Philosophy of Science Part B: Studies in History and Philosophy of Modern Physics
Author(s): Philipp Berghofer
Ontic structural realism refers to the novel, exciting, and widely discussed basic idea that the structure of physical reality is genuinely relational. In its radical form, the doctrine claims that there are, in fact, no objects but only structure, i.e., relations. More moderate approaches state that objects have only relational but no intrinsic properties. In its most moderate and most tenable form, ontic structural realism assumes that at the most fundamental level of physical reality there are only relational properties. This means that the most fundamental objects only possess relational but no non-reducible intrinsic properties. The present paper will argue that our currently best physics refutes even this most moderate form of ontic structural realism. More precisely, I will claim that 1) according to quantum field theory, the most fundamental objects of matter are quantum fields and not particles, and show that 2) according to the Standard Model, quantum fields have intrinsic non-relational properties.

Robertson, Kate (2017) Can the Two-Time Interpretation of Quantum Mechanics Solve the Measurement Problem? [Preprint]
Cuffaro, Michael E. (2017) Information Causality, the Tsirelson Bound, and the ‘Being-Thus’ of Things. [Preprint]
Pettigrew, Richard (2017) The Principal Principle does not imply the Principle of Indifference. [Preprint]
We thought electrons and their two mysterious siblings were fundamental particles. Now there are hints that we need to go smaller still to understand matter

A solution to the second measurement problem, determining what prior microscopic properties can be inferred from measurement outcomes (“pointer positions”), is worked out for projective and generalized (POVM) measurements, using consistent histories. The result supports the idea that equipment prope…
[Phys. Rev. A 96, 032110] Published Wed Sep 13, 2017

A practical quantum computer must not merely store information, but also process it. To prevent errors introduced by noise from multiplying and spreading, a fault-tolerant computational architecture is required. Current experiments are taking the first steps toward noise-resilient logical qubits. But to convert these quantum

Rochefort-Maranda, Guillaume (2016) On the correct interpretation of p values and the importance of random variables. Synthese, 193. ISSN 1573-0964

From what is known today about the elementary particles of matter, and the forces that control their behavior, it may be observed that still a host of obstacles must be overcome that are standing in the way of further progress of our understanding. Most researchers conclude that drastically new concepts must be investigated, new starting points are needed, older structures and theories, in spite of their successes, will have to be overthrown, and new, superintelligent questions will have to be asked and investigated. In short, they say that we shall need new physics. Here, we argue in a different manner. Today, no prototype, or toy model, of any so-called Theory of Everything exists, because the demands required of such a theory appear to be conflicting. The demands that we propose include locality, special and general relativity, together with a fundamental finiteness not only of the forces and amplitudes, but also of the set of Nature’s dynamical variables. We claim that the two remaining ingredients that we have today, Quantum Field Theory and General Relativity, indeed are coming a long way towards satisfying such elementary requirements. Putting everything together in a Grand Synthesis is like solving a gigantic puzzle. We argue that we need the correct analytical tools to solve this puzzle. Finally, it seems to be obvious that this solution will give room neither for “Divine Intervention”, nor for “Free Will”, an observation that, all by itself, can be used as a clue. We claim that this reflects on our understanding of the deeper logic underlying quantum mechanics.

In this second paper, we develop the full mathematical structure of the algebra of the pseudo-observables, in order to solve the quantum measurement problem. Quantum state vectors are recovered but as auxiliary pseudo-observables storing the information acquired in a set of observations. The whole process of measurement is deeply reanalyzed in the conclusive section, evidencing original aspects. The relation of the theory with some popular interpretations of Quantum Mechanics is also discussed, showing that both Relational Quantum Mechanics and Quantum Bayesianism may be regarded as compatible interpretations of the theory. A final discussion on reality, tries to bring a new insight on it.

Local realism is in conflict with special quantum Bell-type models. Recently, several experiments have demonstrated violation of local realism if we trust their setup assuming special relativity valid. In this paper we question the assumption of relativity, point out not commented anomalies and show that the experiment have not closed objectivity loophole because clonability of the result has not been demonstrated. We propose several improvements in further experimental tests of local realism make the violation more convincing.

The impossibility of an indeterministic evolution for standard relativistic quantum field theories, that is, theories in which all fields satisfy the condition that the generators of spacetime translation have spectrum in the forward light-cone, is demonstrated. The demonstration proceeds by arguing that a relativistically invariant theory must have a stable vacuum, and then showing that stability of the vacuum, together with the requirements imposed by relativistic causality, entails deterministic evolution, if all degrees of freedom are standard degrees of freedom.

A new benchmark for quantum teleportation shows that more entangled states are viable for this that previously thought.

Oscillations of a microcantilever at milliKelvin temperature have been accurately measured, leading to more stringent limits on the collapse parameters of wave functions and revealing a noise source of unknown origin.

Despite its age, quantum theory still suffers from serious conceptual difficulties. To create clarity, mathematical physicists have been attempting to formulate quantum theory geometrically and to find a rigorous method of quantization, but this has not resolved the problem. In this article we argue that a quantum theory recursing to quantization algorithms is necessarily incomplete. To provide an alternative approach, we show that the Schrödinger equation is a consequence of three partial differential equations governing the time evolution of a given probability density. These equations, discovered by Madelung, naturally ground the Schrödinger theory in Newtonian mechanics and Kolmogorovian probability theory. A variety of far-reaching consequences for the projection postulate, the correspondence principle, the measurement problem, the uncertainty principle, and the modeling of particle creation and annihilation are immediate. We also give a speculative interpretation of the equations following Bohm, Vigier and Tsekov, by claiming that quantum mechanical behavior is possibly caused by gravitational background noise. 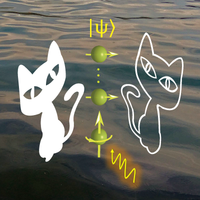