A geometric interpretation for quantum correlations and entanglement according to a particular framework of emergent quantum mechanics is developed. The mechanism described is based on two ingredients: 1. At an hypothetical sub-quantum level description of physical systems, the dynamics has a regime where it is partially ergodic and 2. A formal projection from a two-dimensional time mathematical formalism of the emergent quantum theory to the usual one-dimensional time formalism of quantum dynamics. Observable consequences of the theory are obtained. Among them we show that quantum correlations must be instantaneous from the point of view of the spacetime description, but the spatial distance up to which they can be observed must be bounded. It is argued how our mechanism avoids Bell theorem and Kochen-Specken theorem. Evidence for non-signaling faster than the speed of light in our proposal is discussed.

In this second paper, we develop the full mathematical structure of the algebra of the pseudo-observables, in order to solve the quantum measurement problem. Quantum state vectors are recovered but as auxiliary pseudo-observables storing the information acquired in a set of observations. The whole process of measurement is deeply reanalyzed in the conclusive section, evidencing original aspects. The relation of the theory with some popular interpretations of Quantum Mechanics is also discussed, showing that both Relational Quantum Mechanics and Quantum Bayesianism may be regarded as compatible interpretations of the theory. A final discussion on reality, tries to bring a new insight on it.

Teh, Nicholas (2017) Recovering Recovery: On the relationship between gauge symmetry and Trautman Recovery. [Preprint]
Soysal, Zeynep (2017) Why Is the Universe of Sets Not a Set? [Preprint]
Nguyen, James and Frigg, Roman (2017) Mathematics is not the only language in the book of nature. [Preprint]

According to the world view of macrorealism, the properties of a given system exist prior to and independent of measurement, which is incompatible with quantum mechanics. Leggett and Garg put forward a practical criterion capable of identifying violations of macrorealism, and so far experiments performed on microscopic and mesoscopic systems have always ruled out in favor of quantum mechanics. However, a macrorealist can always assign the cause of such violations to the perturbation that measurements effect on such small systems, and hence a definitive test would require using non-invasive measurements, preferably on macroscopic objects, where such measurements seem more plausible. However, the generation of truly macroscopic quantum superposition states capable of violating macrorealism remains a big challenge. In this work we propose a setup that makes use of measurements on the polarization of light, a property which has been extensively manipulated both in classical and quantum contexts, hence establishing the perfect link between the microscopic and macroscopic worlds. In particular, we use Leggett-Garg inequalities and the criterion of no-signaling in time to study the macrorealistic character of light polarization for different kinds of measurements, in particular with different degrees of coarse-graining. Our proposal is non-invasive for coherent input states by construction. We show for states with well defined photon number in two orthogonal polarization modes, that there always exists a way of making the measurement sufficiently coarse-grained so that a violation of macrorealism becomes arbitrarily small, while sufficiently sharp measurements can always lead to a significant violation.

In the summer of 2016, physicists gathered in Torun, Poland for the 48th annual Symposium on Mathematical Physics. This Symposium was special; it celebrated the 40th anniversary of the discovery of the Gorini-Kossakowski-Sudarshan-Lindblad master equation, which is widely used in quantum physics and quantum chemistry. This article forms part of a Special Volume of the journal Open Systems & Information Dynamics arising from that conference; and it aims to celebrate a related discovery — also by Sudarshan — that of Quantum Maps (which had their 55th anniversary in the same year). Nowadays, much like the master equation, quantum maps are ubiquitous in physics and chemistry. Their importance in quantum information and related fields cannot be overstated. In this manuscript, we motivate quantum maps from a tomographic perspective, and derive their well-known representations. We then dive into the murky world beyond these maps, where recent research has yielded their generalisation to non-Markovian quantum processes.

We present an operational and model-independent framework to investigate the concept of no-backwards-in-time signalling. We define no-backwards-in-time signalling conditions, closely related to spatial no-signalling conditions. These allow for theoretical possibilities in which the future affects the past, nevertheless without signalling backwards in time. This is analogous to non-local but non-signalling spatial correlations. Furthermore, our results shed new light on situations with indefinite causal structure, and their connection to quantum theory.

Rathkopf, Charles (2017) Mental Evolution: A Review of Daniel Dennett’s From Bacteria To Bach and Back. [Preprint]

A simple model of an autonomous quantum clock yields a quantitative connection between the clock’s thermodynamic cost and its accuracy and resolution. 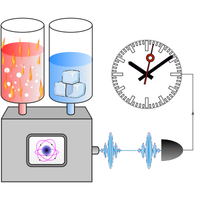 The quantum Cramér-Rao bound (QCRB) sets a fundamental limit for the measurement of classical signals with detectors operating in the quantum regime. Using linear-response theory and the Heisenberg uncertainty relation, we derive a general condition for achieving such a fundamental limit. When appli…
[Phys. Rev. Lett. 119, 050801] Published Wed Aug 02, 2017

The observation of hyperfine structure in atomic hydrogen by Rabi and co-workers and the measurement of the zero-field ground-state splitting at the level of seven parts in 1013 are important achievements of mid-twentieth-century physics. The work that led to these achievements also provided the first evidence for the anomalous magnetic moment of the electron, inspired Schwinger’s relativistic theory of quantum electrodynamics and gave rise to the hydrogen maser, which is a critical component of modern navigation, geo-positioning and very-long-baseline interferometry systems. Research at the Antiproton Decelerator at CERN by the ALPHA collaboration extends these enquiries into the antimatter sector. Recently, tools have been developed that enable studies of the hyperfine structure of antihydrogen—the antimatter counterpart of hydrogen. The goal of such studies is to search for any differences that might exist between this archetypal pair of atoms, and thereby to test the fundamental principles on which quantum field theory is constructed. Magnetic trapping of antihydrogen atoms provides a means of studying them by combining electromagnetic interaction with detection techniques that are unique to antimatter. Here we report the results of a microwave spectroscopy experiment in which we probe the response of antihydrogen over a controlled range of frequencies. The data reveal clear and distinct signatures of two allowed transitions, from which we obtain a direct, magnetic-field-independent measurement of the hyperfine splitting. From a set of trials involving 194 detected atoms, we determine a splitting of 1,420.4 ± 0.5 megahertz, consistent with expectations for atomic hydrogen at the level of four parts in 104. This observation of the detailed behaviour of a quantum transition in an atom of antihydrogen exemplifies tests of fundamental symmetries such as charge–parity–time in antimatter, and the techniques developed here will enable more-precise such tests.

Time has a fundamentally different character in quantum mechanics and in general relativity. In quantum theory events unfold in a fixed time order while in general relativity temporal order is influenced by the distribution of matter. When the distribution of matter requires a quantum description, temporal order is expected to become non-classical — a scenario beyond the scope of current theories. Here we provide a direct description of such a scenario. We consider a massive body in a spatial superposition and show how it leads to “entanglement” of temporal orders between time-like events in the resulting space-time. This entanglement enables accomplishing a task, violation of a Bell inequality, that is impossible under classical temporal order. Violation of the inequality means that temporal order becomes non-classical — it cannot be described by locally defined classical variables. Our approach provides a quantitative method for investigating quantum aspects of space-time and gravity.

A new model extends the definition of causality to quantum-mechanical systems. 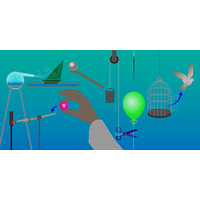 The study of quantum thermal machines, and more generally of open quantum systems, often relies on master equations. On the one hand, there is the widely used, but often criticized, local approach, where machine sub-systems locally couple to thermal baths. On the other hand, in the more established global approach, thermal baths couple to global degrees of freedom of the machine. There has been debate as to which of these two conceptually different approaches should be used in situations out of thermal equilibrium. Here we compare the local and global approaches against an exact solution for a particular class of thermal machines. We consider thermodynamically relevant observables, such as heat currents, as well as the quantum state of the machine. Our results show that the use of a local master equation is generally well justified. In particular, for weak coupling, the local approach agrees with the exact solution, whereas the global approach fails for non-equilibrium situations. For strong coupling, the global approach generally gives a better estimate of the quantum state of the machine. However, in the presence of an external driving field, required for the operation of the heat engine under investigation, the global approach fails to capture the performance of the engine even in this regime.

The Young double-slit interference pattern produced by quantum objects, like photons, that move through a double-slit is regarded, by the conventional Copenhagen interpretation of Quantum Mechanics, as the evidence of the wave-like behaviour potentially contained in the wave function. On the contrary, a more realistic view of this phenomenon considers the quantum object a particle accompanied by a pilot wave which would be the cause of the interference fringes. This paper proposes a feasible experiment, based on an easy variation of the nowadays common double-slit experimental set-ups, aimed at detecting the effects of the pilot wave once ‘detached’ from the particles that it steers. Besides, a further realistic idea, based on the geometrical violation of Local Lorentz Invariance (LLI), is put forward as to the intrinsic nature of the photon. This new idea along with the possibly positive results of the experiment would allow us to shed new light on the real nature of quantum objects in term of the geometrical violation of LLI.

The transition from quantum to classical statistics is studied in light of Huggett’s finding that the empirical data do not support a strong form of individuality known as ‘haecceitism’ for classical objects. The various statistical distributions are examined, and it is found that weaker forms of individuality, corresponding to separability and distinguishability, emerge in the classical limit. The role of the chemical potential (the rate of change of the Helmholtz free energy with particle number) is found to be of crucial significance in characterizing this emergence of classicality from the quantum distributions.

The rod photoreceptors in the retina are known to be sensitive to single photons, but it has long been debated whether these single-photon signals propagate through the rest of the visual system and lead to perception. Recently, single-photon sources developed in the field of quantum optics have enabled direct tests of single-photon vision that were not possible with classical light sources. Using a heralded source based on spontaneous parametric downconversion to generate single photons which were sent to an observer at either an early or late time, Tinsley and Molodtsov et al. (2016) had observers judge when the photon was seen. Based on the above-chance accuracy in both a subset of high-confidence trials and in all post-selected trials, they claimed to show that humans can see single photons. However, we argue that this work suffers from three major issues: self-contradicting results, inappropriate statistical analyses, and a critical lack of statistical power. As a result, we cannot conclude that humans can see single photons based on the data of this study. We present a careful examination of the statistical analyses and the internal consistency of the data, which indicated that none of the key evidence holds.