In classical and quantum theories, there is a constraint on how much timelike information can be conveyed. New theoretical work predicts that the input-output correlations attainable when transmitting two elementary systems cannot depend on whether the systems are transmitted in series or in parallel. 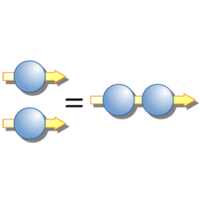 Publication date: Available online 13 July 2017
Source:Studies in History and Philosophy of Science Part B: Studies in History and Philosophy of Modern Physics
Author(s): Guido Bacciagaluppi, Elise Crull, Owen J.E. Maroney
The celebrated Dreimännerarbeit by Born, Heisenberg and Jordan contains a matrix-mechanical derivation by Jordan of Einstein’s formula for blackbody fluctuations. Jordan appears to have considered this to be one of his finest contributions to quantum theory, but the status of his derivation is puzzling. In our Dreimenschenarbeit, we show how to understand what Jordan was doing in the double context of a Boltzmannian approach to statistical mechanics and of the early ‘statistical interpretation’ of matrix mechanics.

The uncertainty relation in quantum mechanics is traditionally written in terms of mean as the measure of central tendency and standard deviation as the measure of dispersion. It puts a constraint on the product of the spreads of position and momentum of quantum states, a feature that is absent in classical mechanics. Based on a different statistical concept, namely the median, we propose a quantum uncertainty relation between the semi-interquartile ranges of the position and momentum distributions of arbitrary quantum states, going beyond the mean-based uncertainty. We find that unlike the mean-based uncertainty relation, the median-based one is not saturated for Gaussian distributions in position. Instead, the Cauchy distributions in position turn out to be the most classical among the distributions that we have studied.

The interplay between the action-reaction principle and the energy-momentum conservation law is revealed by the examples of the Maxwell-Lorentz and Yang-Mills-Wong theories, and general relativity. These two statements are shown to be equivalent in the sense that both hold or fail together. Their mutual agreement is demonstrated most clearly in the self-interaction problem by taking account of the rearrangement of degrees of freedom appearing in the action of the Maxwell-Lorentz and Yang-Mills-Wong theories. The failure of energy-momentum conservation in general relativity is attributed to the fact that this theory allows solutions having nontrivial topologies. The total energy and momentum of a system with nontrivial topological content is found to be ambiguous, coordintization-dependent quantities. For example, the energy of a Schwarzschild black hole may take any positive value greater than, or equal to, the mass of the body whose collapse is responsible for arising this black hole. We draw the analogy to the paradoxial Banach-Tarski theorem; the measure becomes a poorly defined concept if initial three-dimensional bounded sets are rearranged in topologically nontrivial ways through the action of free non-Abelian isometry groups.

On the basis of the coincidence of the physical dimensions of Newton’s gravitational constant $G_{N} $ and the phenomenological Fermi constant $G_{F} $ for weak interaction, it is suggested that there is a certain similarity (“scaling”) between weak forces, which are caused by the exchange of massive intermediate vector bosons with spin $S=1$, and “superweak” gravitational forces that can be caused by the exchange of “supermassive” hypothetical tensor bosons with spin $S=2$. By analogy with how the masses of intermediate bosons in the theory of electroweak interaction arise as a result of spontaneous breaking of the gauge symmetry of the electromagnetic field due to its interaction with the nonlinear scalar Higgs field, the masses of hypothetical tensor bosons carrying gravitational interaction can also arise as a result of spontaneous breaking of gauge symmetry of the massless gravitons when they interact with a fundamental nonlinear scalar field in a flat 4-dimensional space-time.

General relativity and quantum mechanics are at odds in the extreme environments of black holes, but black holes can only be observed from large distances. Scientists propose a solid-state “black hole on a chip” using the interface between a three-dimensional topological insulator and an ordinary superconductor. 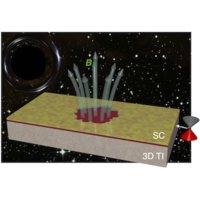 We study the fluctuations of the work performed on a driven quantum system, defined as the difference between subsequent measurements of energy eigenvalues. These work fluctuations are governed by statistical theorems with similar expressions in classical and quantum physics. We show that we can dis…
[Phys. Rev. A 96, 012115] Published Thu Jul 13, 2017

The famous Stern-Gerlach experiment has played an important role in our understanding of quantum behavior. We propose and analyze a modified version of this experiment where the magnetic field of the detector is in a quantum superposition, which may be experimentally realized using a superconducting flux qubit. We show that if incident spin-$1/2$ particles couple with the two-state magnetic field, a discrete target distribution results that resembles the target distribution in the classical Stern-Gerlach experiment. As an application of the general result, we compute the distribution for a square waveform of the incident fermion. This experimental setup allows us to establish the quantization of the intrinsic angular momentum of a spin-$1/2$ particle without the complete collapse of the particle’s spin wavefunction. We also note that if Bohm’s version of the EPR experiment is conducted using this modified Stern-Gerlach apparatus, the observers will be unable to find a correlation between the detected particles.

Assuming a well-behaving quantum-to-classical transition, measuring large quantum systems should be highly informative with low measurement-induced disturbance, while the coupling between system and measurement apparatus is fairly simple and weak. Here, we show that this is indeed possible within th…
[Phys. Rev. A 96, 012111] Published Wed Jul 12, 2017

In this article we present a brief introduction to the kinematical setup that underlies the quantization used in loop quantum gravity. This review has been published as a chapter in the monograph “Loop Quantum Gravity: The First 30 Years”, edited by Abhay Ashtekar and Jorge Pullin, that was recently published in the series “100 Years of General Relativity”.

Quantum mechanics dictates that a continuous measurement of the position of an object imposes a random quantum back-action (QBA) perturbation on its momentum. This randomness translates with time into position uncertainty, thus leading to the well known uncertainty on the measurement of motion. As a consequence of this randomness, and in accordance with the Heisenberg uncertainty principle, the QBA puts a limitation—the so-called standard quantum limit—on the precision of sensing of position, velocity and acceleration. Here we show that QBA on a macroscopic mechanical oscillator can be evaded if the measurement of motion is conducted in the reference frame of an atomic spin oscillator. The collective quantum measurement on this hybrid system of two distant and disparate oscillators is performed with light. The mechanical oscillator is a vibrational ‘drum’ mode of a millimetre-sized dielectric membrane, and the spin oscillator is an atomic ensemble in a magnetic field. The spin oriented along the field corresponds to an energetically inverted spin population and realizes a negative-effective-mass oscillator, while the opposite orientation corresponds to an oscillator with positive effective mass. The QBA is suppressed by −1.8 decibels in the negative-mass setting and enhanced by 2.4 decibels in the positive-mass case. This hybrid quantum system paves the way to entanglement generation and distant quantum communication between mechanical and spin systems and to sensing of force, motion and gravity beyond the standard quantum limit.

Quantum physics ultimately constrains how well sensors of position, speed and acceleration can perform. A hybrid quantum system that avoids these constraints could give rise to improved sensor technologies. See Letter p.191

Physicists find ways to make LIGO and other gravitational-wave detectors even more sensitive.

Witness gravity’s quantum side in the lab

If physics is a science that unveils the fundamental laws of nature, then the appearance of mathematical concepts in its language can be surprising or even mysterious. This was Eugene Wigner’s argument in 1960. I show that another approach to physical theory accommodates mathematics in a perfectly reasonable way. To explore unknown processes or phenomena, one builds a theory from fundamental principles, employing them as constraints within a general mathematical framework. The rise of such theories of the unknown, which I call blackbox models, drives home the unsurprising effectiveness of mathematics. I illustrate it on the examples of Einstein’s principle theories, the S-matrix approach in quantum field theory, effective field theories, and device-independent approaches in quantum information.