Weyl’s original scale geometry of 1918 (“purely infinitesimal geometry”) was withdrawn by its author from physical theorizing in the early 1920s. It had a comeback in the last third of the 20th century in different contexts: scalar tensor theories of gravity, foundations of gravity, foundations of quantum mechanics, elementary particle physics, and cosmology. It seems that Weyl geometry continues to offer an open research potential for the foundations of physics even after the turn to the new millennium.

Quantum modifications to black holes on scales comparable to the horizon size, or even more radical physics, are apparently needed to reconcile the existence of black holes with the principles of quantum mechanics. This piece gives an overview of some possible observational tests for such departures from a classical description of black holes, via gravitational wave detection and very long baseline interferometry. (Invited comment for Nature Astronomy.)

The Quantum Cheshire Cat [New J. Phys. 15, 113015, 2013] (QCC) is an effect defined within the Weak Measurements framework by which a property of a quantum particle appears to be spatially separated from its position. The status of this effect has however remained unclear, as claims of experimental observation of the QCC have been disputed by strong criticism of the experimental as well as the theoretical aspects of the effect. In this paper we clarify in what precise sense the QCC can be regarded as an unambiguous consequence of the standard quantum mechanical formalism applied to describe quantum pointers weakly coupled to a system. In light of this clarification, the raised criticisms of the QCC effect are rebutted. We further point out that the limitations of the experiments performed to date imply that a loophole-free experimental demonstration of the QCC has not yet been achieved.

The objective, classical world emerges from the underlying quantum substrate via the proliferation of redundant copies of selected information into the environment, which acts as a communication channel, transmitting that information to observers. These copies are independently accessible, allowing …
[Phys. Rev. A 95, 030101(R)] Published Wed Mar 08, 2017

Publication date: 18 April 2017
Source:Physics Letters A, Volume 381, Issue 15
Author(s): Mariami Gachechiladze, Otfried Gühne
In a paper by Popescu and Rohrlich [1] a proof has been presented showing that any pure entangled multiparticle quantum state violates some Bell inequality. We point out a gap in this proof, but we also give a construction to close this gap. It turns out that with some extra effort all the results from the aforementioned publication can be proven. Our construction shows how two-particle entanglement can be generated via performing local projections on a multiparticle state.

The complete gravitational collapse of a body in general relativity will result in the formation of a black hole. Although the black hole is classically stable, quantum particle creation processes will result in the emission of Hawking radiation to infinity and corresponding mass loss of the black hole, eventually resulting in the complete evaporation of the black hole. Semiclassical arguments strongly suggest that, in the process of black hole formation and evaporation, a pure quantum state will evolve to a mixed state, i.e., there will be “information loss.” There has been considerable controversy over this issue for more than 40 years. In this review, we present the arguments in favor of information loss, and analyze some of the counter-arguments and alternative possibilities.

We argue that the Lorentzian path integral is a better starting point for quantum cosmology than the Euclidean version. In particular, we revisit the mini-superspace calculation of the Feynman path integral for quantum gravity with a positive cosmological constant. Instead of rotating to Euclidean time, we deform the contour of integration over metrics into the complex plane, exploiting Picard-Lefschetz theory to transform the path integral from a conditionally convergent integral into an absolutely convergent one. We show that this procedure unambiguously determines which semiclassical saddle point solutions are relevant to the quantum mechanical amplitude. Imposing “no-boundary” initial conditions, i.e., restricting attention to regular, complex metrics with no initial boundary, we find that the dominant saddle contributes a semiclassical exponential factor which is precisely the {\it inverse} of the famous Hartle-Hawking result.

We give a survey of our joint ongoing work with Ali Chamseddine, Slava Mukhanov and Walter van Suijlekom. We show how a problem purely motivated by “how geometry emerges from the quantum formalism” gives rise to a slightly noncommutative structure and a spectral model of gravity coupled with matter which fits with experimental knowledge. This text will appear as a contribution to the volume: “Foundations of Mathematics and Physics one century after Hilbert”. Editor: Joseph Kouneiher. Collection Mathematical Physics, Springer 2017

Hoehn, Philipp A (2017) Quantum theory from rules on information acquisition. In: UNSPECIFIED.
Christian, Joy (2017) Refutation of Richard Gill’s Argument Against my Disproof of Bell’s Theorem. [Preprint]

de Sitter space is shown to arise as resonance in transition amplitudes in quantum gravity. 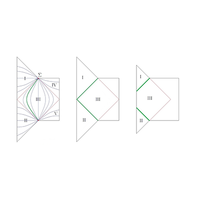 The Salecker-Wigner-Peres (SWP) clock is often used to determine the duration a quantum particle is supposed to spend is a specified region of space $\Om$. By construction, the result is a real positive number, and the method seems to avoid the difficulty of introducing complex time parameters, which arises in the Feynman paths approach. However, it tells very little about what is being learnt about the particle’s motion. We investigate this matter further, and show that the SWP clock, like any other Larmor clock, correlates the rotation of its angular momentum with the durations $\tau$ Feynman paths spend in $\Om$, therefore destroying interference between different durations. An inaccurate weakly coupled clock leaves the interference almost intact, and the need to resolve resulting “which way?” problem is the main difficulty at the centre of the “tunnelling time” controversy. In the absence of a probability distribution for the values of $\tau$, the SWP results are expressed in terms of moduli of the “complex times”, given by the weighted sums of the corresponding probability amplitudes. It is shown that over-interpretation of these results, by treating the SWP times as physical time intervals, leads to paradoxes and should be avoided. We analyse various settings of the SWP clock, different calibration procedures, and the relation between the SWP results and the quantum dwell time. Our general analysis is applied to the cases of stationary tunnelling and tunnel ionisation

We study the fluctuations of the work performed on a driven quantum system, defined as the difference between subsequent measurements of energy eigenvalues. These work fluctuations are governed by statistical theorems with similar expressions in classical and quantum physics. In this article we show that we can distinguish quantum and classical work fluctuations, as the latter can be described by a macrorealistic theory and hence obey Leggett-Garg inequalities. We show that these inequalities are violated by quantum processes in a driven two-level system and in a harmonic oscillator subject to a squeezing transformation.

According to quantum theory, randomness is a fundamental property of the universe yet classical physics is mostly deterministic. In this article I show that it is possible for deterministic systems to arise from random ones and discuss the implications of this for the concept of free will.