Dawid, Richard (2017) The Significance of Non-Empirical Confirmation in Fundamental Physics. [Preprint]
Gomori, Marton and Szabo, Laszlo E. (2017) On the Persistence of the Electromagnetic Field. [Preprint]

Frequent Measurements on an unstable particle located at observable initial state freeze the particle on this state, known as quantum Zeno effect [1-14]. Measurements on an observable subspace further open the prelude of quantum Zeno dynamics [15-17]. These phenomena affect the results of quantum measurement that has been widely used in quantum information and quantum computation [18-21]. However, this common argument is insufficient when the initial state is coupled with a continuum reservoir. In such an irreversible system, intrinsic decay property destroys the frozen behavior. Although it has been proven that the decay rate of the initial state will be affected by measurements [7], the knowledge of detailed mechanisms for this measurement-dependent decay is still limited. In this work, we found based on three-subsystem perturbation theory that the indirect correlation between a continuum reservoir and a measurement apparatus through the interaction with a quantum system causes a Rabi-like inter-modulation among these subsystems. The indirect correlation effect from this combination drives the system into quantum Zeno and reactivation regions, which are dependent upon the Rabi strength, pulse duty, and its repetition rate. We also found that the dynamical changes of decay rate are quite different in continuous and pulsed measurements, and, thus, significantly affect the dynamics of the system.

Theoretical calculations show that the performance of a quantum heat engine over several cycles can’t be judged by analyzing just a single cycle. 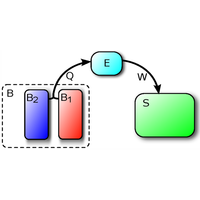 These notes are an introduction to General Relativity as a Quantum Effective Field Theory, following the material given in a short course on the subject at EPFL. The intent is to develop General Relativity starting from a quantum field theoretic viewpoint, and to introduce some of the techniques needed to understand the subject.

We show how the ro-translational motion of anisotropic particles is affected by the model of Continuous Spontaneous Localization (CSL), the most prominent hypothetical modification of the Schr\”odinger equation restoring realism on the macroscale. We derive the master equation describing collapse-induced spatio-orientational decoherence, and demonstrate how it leads to linear- and angular-momentum diffusion. Since the associated heating rates scale differently with the CSL parameters, the latter can be determined individually by measuring the random motion of a single levitated nanorotor.

The nature of quantum correlations in networks featuring independent sources of entanglement remains poorly understood. Here, focusing on the simplest network of entanglement swapping, we start a systematic characterization of the set of quantum states leading to violation of the so-called “bilocality” inequality. First, we show that all possible pairs of entangled pure states can violate the inequality. Next, we derive a general criterion for violation for arbitrary pairs of mixed two-qubit states. Notably, this reveals a strong connection between the CHSH Bell inequality and the bilocality inequality, namely that any entangled state violating CHSH also violates the bilocality inequality. We conclude with a list of open questions.

One of the formulations of Heisenberg uncertainty principle, concerning so-called measurement uncertainty, states that the measurement of one observable modifies the statistics of the other. Here, we derive such a measurement uncertainty principle from two comprehensible assumptions: impossibility of instantaneous messaging at a distance (no-signaling), and violation of Bell inequalities (non-locality). The uncertainty is established for a pair of observables of one of two spatially separated systems that exhibit non-local correlations. To this end, we introduce a gentle form of measurement which acquires partial information about one of the observables. We then bound disturbance of the remaining observables by the amount of information gained from the gentle measurement, minus a correction depending on the degree of non-locality. The obtained quantitative expression resembles the quantum mechanical formulations, yet it is derived without the quantum formalism and complements the known qualitative effect of disturbance implied by non-locality and no-signaling.

Physicists harness starlight to support the case for entanglement.

Diverse measurements indicate that entropy grows as the universe evolves, we analyze from a quantum point of view plausible scenarios that allow such increase.

Collapse models possibly suggest the need for a better understanding of the structure of space-time. We argue that physical space, and space-time, are emergent features of the Universe, which arise as a result of dynamical collapse of the wave function. The starting point for this argument is the observation that classical time is external to quantum theory, and there ought to exist an equivalent reformulation which does not refer to classical time. We propose such a reformulation, based on a non-commutative special relativity. In the spirit of Trace Dynamics, the reformulation is arrived at, as a statistical thermodynamics of an underlying classical dynamics in which matter and non-commuting space-time degrees of freedom are matrices obeying arbitrary commutation relations. Inevitable statistical fluctuations around equilibrium can explain the emergence of classical matter fields and classical space-time, in the limit in which the universe is dominated by macroscopic objects. The underlying non-commutative structure of space-time also helps understand better the peculiar nature of quantum non-locality, where the effect of wave-function collapse in entangled systems is felt across space-like separations.

I present the reconstruction of the involvement of Karl Popper in the community of physicists concerned with foundations of quantum mechanics, in the 1980s. At that time Popper gave active contribution to the research in physics, of which the most significant is a new version of the EPR thought experiment, alleged to test different interpretations of quantum mechanics. The genesis of such an experiment is reconstructed in detail, and an unpublished letter by Popper is reproduced in the present paper to show that he formulated his thought experiment already two years before its first publication in 1982. The debate stimulated by the proposed experiment as well as Popper’s role in the physics community throughout 1980s is here analysed in detail by means of personal correspondence and publications.

International Journal of Modern Physics A

The Englert–Brout–Higgs mechanism — An unfinished project

The conceptual foundation of the Englert–Brout–Higgs (EBH) mechanism (understood as a set of a scalar field’s couplings to a gauge system and a fermion system) is clarified (as being provided by broken symmetry solution of the scalar field and broken symmetry solutions of the gauge and fermion systems induced by the scalar field’s couplings to these systems, which are manifested in massive scalar and vector bosons as a result of reorganizing the physical degrees of freedom in the scalar and gauge sectors, whose original organization renders possible the broken symmetry solution to the scalar sector and symmetrical solutions to the gauge sector); its ontological status, as a physically real mechanism or merely an instrumental device, is examined, and a new ontologically primary entity, the symbiont of scalar–vector moments is suggested to replace the old ontology of scalar field and vector (gauge) field as the physical underpinning for a realistic understanding of the EBH mechanism; with a conclusion that two puzzles, thetransmutation of the Goldstone modes’ dynamic identity and the fixity in reorganizing the physical degrees of freedom within the symbiont, have to be properly addressed before a consistent realist understanding of the mechanism can be developed.