We discuss an apparent information paradox that arises in a materialist’s description of the Universe if we assume that the Universe is 100% quantum. We discuss possible ways out of the paradox, including that Laws of Nature are not purely deterministic, or that gravity is classical. Our observation of the paradox stems from an interdisciplinary thought process whereby the Universe can be viewed as a “quantum computer”. Our presentation is intentionally nontechnical to make it accessible to as wide a readership base as possible.

We formulate a Born rule for families of quantum systems parametrized by a noncommutative space of control parameters. The resulting formalism may be viewed as a generalization of quantum mechanics where overlaps take values in a noncommutative algebra, rather than in the complex numbers.

Spekkens’ toy model is a non-contextual hidden variable model with an epistemic restriction, a constraint on what an observer can know about reality. The aim of the model, developed for continuous and discrete prime degrees of freedom, is to advocate the epistemic view of quantum theory, where quantum states are states of incomplete knowledge about a deeper underlying reality. Many aspects of quantum mechanics and protocols from quantum information can be reproduced in the model. In spite of its significance, a number of aspects of Spekkens’ model remained incomplete. Formal rules for the update of states after measurement had not been written down, and the theory had only been constructed for prime-dimensional, and infinite dimensional systems. In this work, we remedy this, by deriving measurement update rules, and extending the framework to derive models in all dimensions, both prime and non-prime. Stabilizer quantum mechanics is a sub-theory of quantum mechanics with restricted states, transformations and measurements. First derived for the purpose of constructing error correcting codes, it now plays a role in many areas of quantum information theory. Previously, it had been shown that Spekkens’ model was operationally equivalent in the case of infinite and odd prime dimensions. Here, exploiting known results on Wigner functions, we extend this to show that Spekkens’ model is equivalent to stabilizer quantum mechanics in all odd dimensions, prime and non-prime. This equivalence provides new technical tools for the study of technically difficult compound-dimensional stabilizer quantum mechanics.

Quantum theory is the most experimentally verified physical theory in the history of science. Yet it may be the case that quantum theory is only an effective description of the world, in the same way that classical physics is an effective description of the quantum world. In this work we ask whether there can exist an operationally-defined theory superseding quantum theory, but which reduces to quantum theory via a decoherence-like mechanism. We prove that no such post-quantum theory can exist if it is demanded that it satisfies two natural physical principles, causality and purification. Here, causality formalises the statement that information propagates from present to future, and purification that each state of incomplete information arises in an essentially unique way due to lack of information about an environment system. Hence, our result can either be viewed as a justification of why the fundamental theory of Nature is quantum, or as showing in a rigorous manner that any post-quantum theory must abandon the principle of causality, the principle of purification, or both.

We apply the formalism of quantum estimation theory to extract information about potential collapse mechanisms of the continuous spontaneous localization (CSL) form. In order to estimate the strength with which the field responsible for the CSL mechanism couples to massive systems, we consider the o…
[Phys. Rev. A 95, 012132] Published Wed Jan 25, 2017

There exist quantum phenomena that cannot be explained by noncontextual hidden-variable theories, yet the majority of them requires measurements that are performed on a single quantum system at a time. This fact constrains the phenomenon of contextuality to the microscopic domain. It is therefore na…
[Phys. Rev. A 95, 012133] Published Wed Jan 25, 2017

Your article on the Axion Dark Matter eXperiment (ADMX) suggests that the lattice quantum chromodynamics (QCD) calculation by S. Borsanyi et al. (Nature539, 69–71;10.1038\nature201152016) might be bad news for the ADMX because it could place

Proposed models of closed timelike curves (CTCs) have been shown to enable powerful information-processing protocols. We examine the simulation of models of CTCs both by other models of CTCs and by physical systems without access to CTCs. We prove that the recently proposed transition probability CTCs (T-CTCs) are physically equivalent to postselection CTCs (P-CTCs), in the sense that one model can simulate the other with reasonable overhead. As a consequence, their information-processing capabilities are equivalent. We also describe a method for quantum computers to simulate Deutschian CTCs (but with a reasonable overhead only in some cases). In cases for which the overhead is reasonable, it might be possible to perform the simulation in a table-top experiment. This approach has the benefit of resolving some ambiguities associated with the equivalent circuit model of Ralph et al. Furthermore, we provide an explicit form for the state of the CTC system such that it is a maximum-entropy state, as prescribed by Deutsch.

A proposal for using an accelerated plasma mirror to study the black hole information paradox elevates a thought experiment into a potential reality. 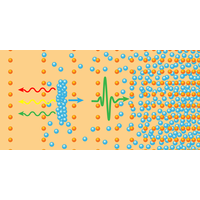 When continuous parameters in a QFT are varied adiabatically, quantum states typically undergo mixing—a phenomenon characterized by the Berry phase. We initiate a systematic analysis of the Berry phase in QFT using standard quantum mechanics methods. We show that a non-trivial Berry phase appears in many familiar QFTs. We study a variety of examples including free electromagnetism with a theta angle, and certain supersymmetric QFTs in two and four spacetime dimensions. We also argue that a large class of QFTs with rich Berry properties is provided by CFTs with non-trivial conformal manifolds. Using the operator-state correspondence we demonstrate in this case that the Berry connection is equivalent to the connection on the conformal manifold derived previously in conformal perturbation theory. In the special case of chiral primary states in 2d N=(2,2) and 4d N=2 SCFTs the Berry phase is governed by the tt* equations. We present a technically useful rederivation of these equations using quantum mechanics methods.